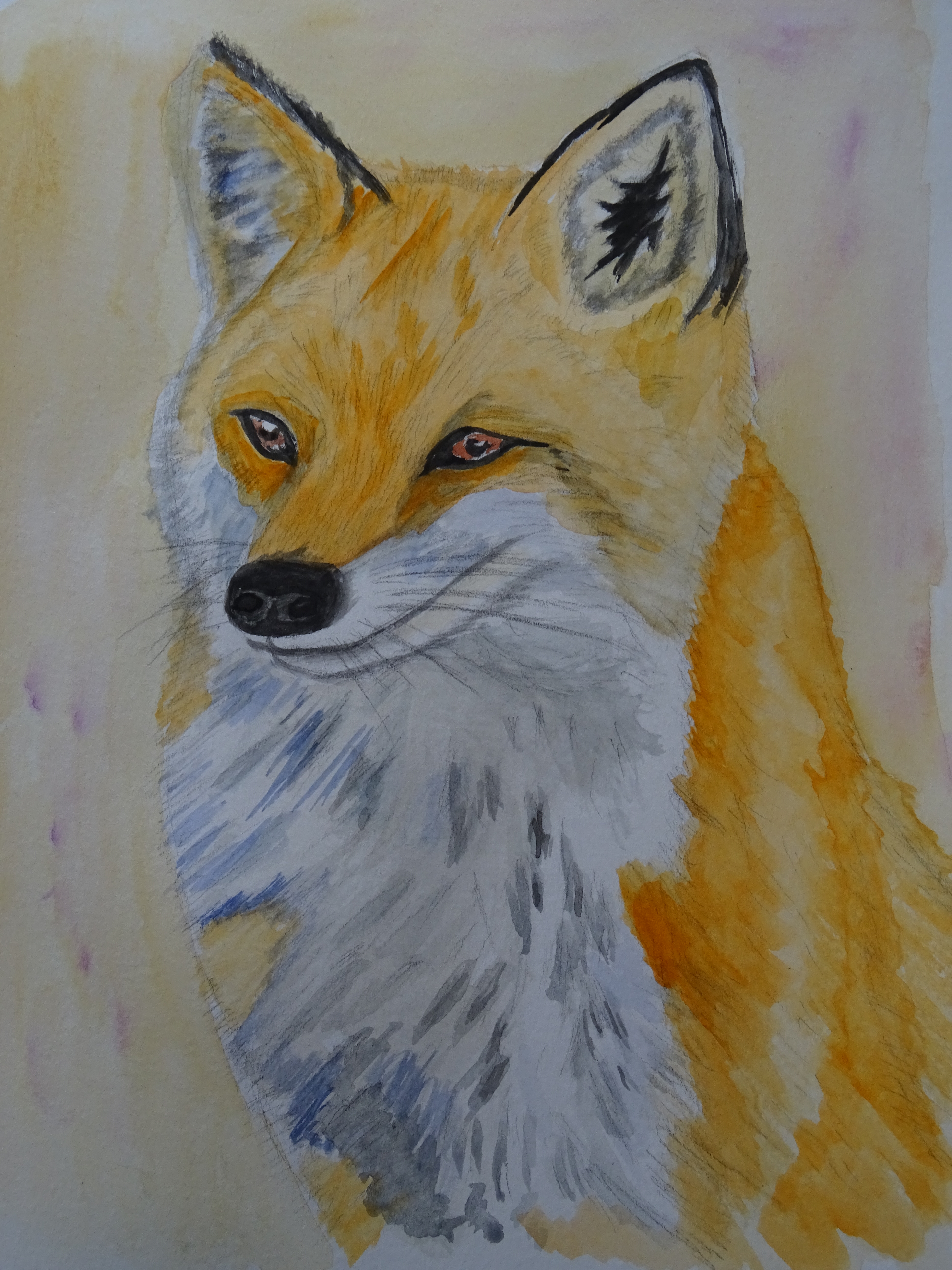 It was painted in my daler rowney mixed media sketchbook with Sakura Koi watercolours. The reference photo came from pixabay.

Prints are available of this on society6

I was going for a more serious look on this fox, but it turned out cuter than intended, which I’m actually rather happy with.  This is the first painting or drawing of a fox I’ve ever done.

Other firsts this week have been an acrylic painting of elephants and a portrait in acrylic, both of which can be seen on my instagram.

For anyone interested in finding out more about fur foxes, I highly recommend checking out my friend Kats’ website https://kaiswayridgefoxes.com there’s lots of cute pictures of her foxes and interesting information. The site is named in honour of one of her foxes Kai who was unfortunately recklessly released by someone 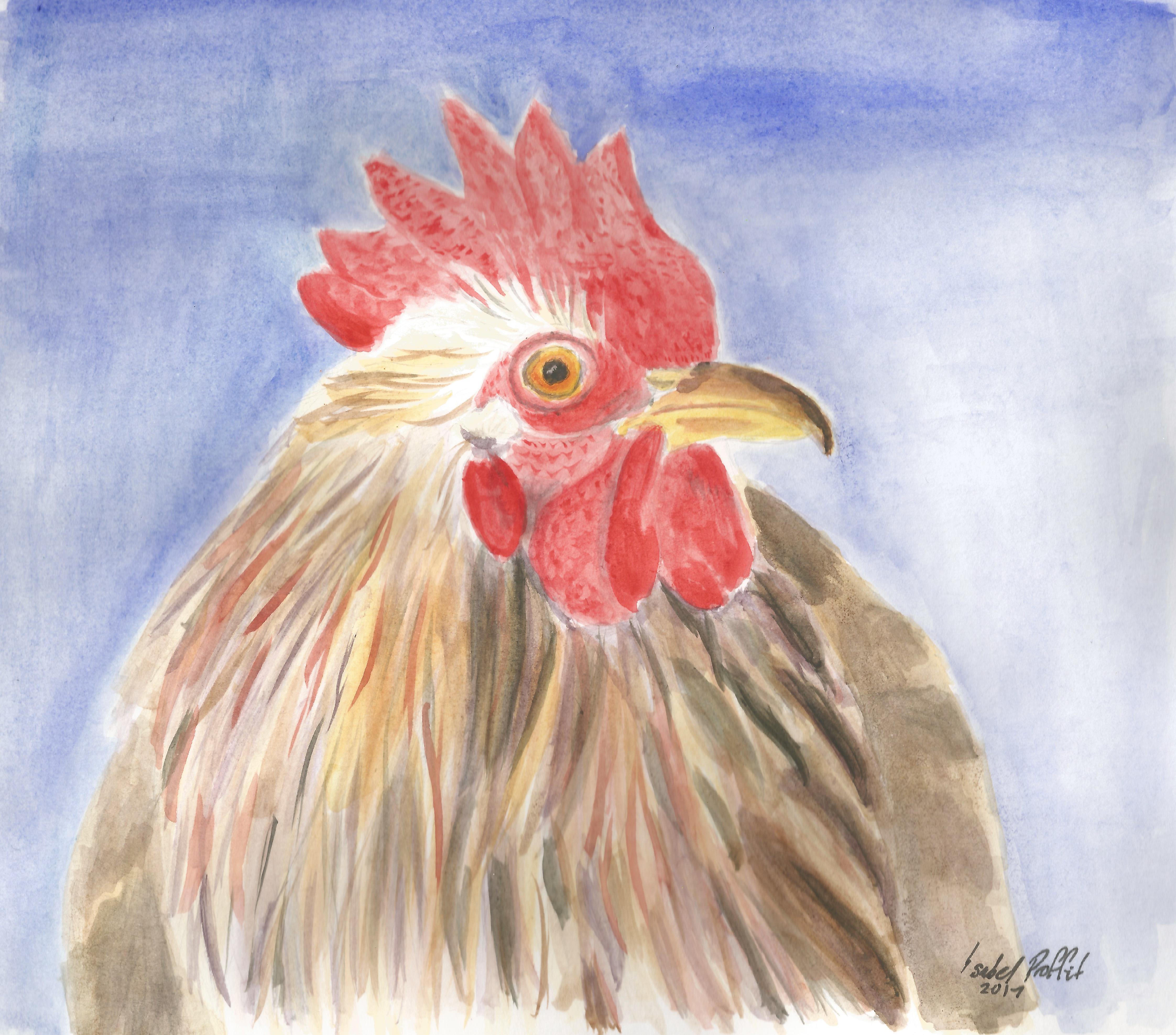 I’ve been updating my instagram quite a bit, but thought I’d actually do a post on my current paintings. All three of these were done using Sakura Koi watercolours (one of my favourite watercolour sets)  on Derwent 140lbs A4 watercolour paper – I like the smoothness of this paper which allows for more detail.

I completed all of these paintings only using one brush, it’s a number 10 SAA all rounder brush that I got for free after buying some other things from SAA  So far I am totally in love with this brush for watercolours, it’s big enough for decent washes and yet also works well for detail.

The reference photo for both the Chicken and the Robin came from Pixabay. The cupcakes were sort of freestyled whilst also looking at various cupcake pictures on pixabay… safe to say it made me want cakes after that. 🙂

Prints are available of all of these on Fine art america 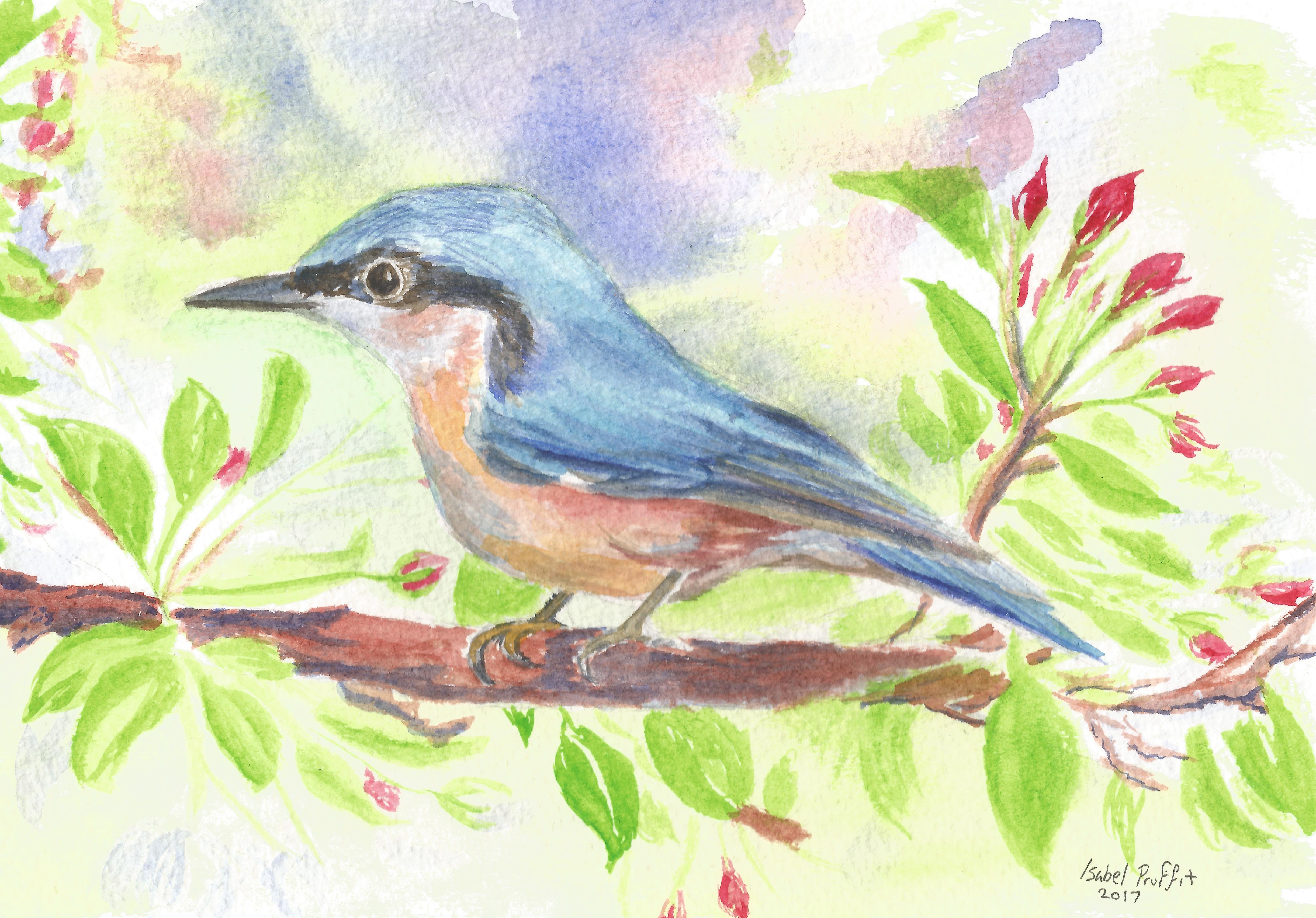 Not entirely sure what kind of bird this is, which is unusual for me, but saw this picture on pixabay and thought “Hey, that’s pretty!” so that’s what I spent a bit of yesterday doing.

I drew it out on Winsor and Newton A5 140lb cold pressed watercolour paper. I love this paper because of the depth and character it feels like it adds to watercolours.

I used my Sakura Koi watercolours for the painting and tried to limit myself as to how many colours I was using, unlike usual where I try and use way too much of everything. Sometimes simple is best. The colours I used I think were Payne’s Grey, Crimson Lake, Permanent Deep Yellow, Ultramarine, Cerulean Blue and Yellow Green.

Prints of this are available here at fine art america

I’d been wanting to try to paint something like this as I really do love these dogs, as much as I’m a crazy cat lady, if there’s one dog I’d have a soft spot for it would probably be Springer Spaniels, or Spaniels of any kind really.  Well other than Rottweilers, which are my complete favourite, but that’s a different story.

The reasoning behind this is that Springer Spaniels are working dogs and the one that made it’s way into my affections in the first place is the lovely, amazingly well trained one that works on a farm run by relatives of mine at Lacey’s Family Farm. I guess I just like ones I know to be well trained.

The reference photo for this came from paint my photo, a link for it is here

It’s been a pretty hectic yet boring two weeks all at the same time.  I’ve been creative yet not done things I meant to do.  We also got two more kittens, they’ll never replace my dear Melody (yes her full name was Melody Pond) who got tragically taken from us in June, but they are certainly noisy, crazy and have a streak similar to her in unique weirdness.  It shows what a cat she was that you have to have two kittens to even get close to the daily impact she made on our lives.

In the past few weeks I meant to have a whole lot of knitting done for my cousin who’s just had a baby, instead by the time of the babies birth I’d only done a pair of booties, and started a few other things.  So instead she had those and some previously finished things.

Although here’s some of what I have got done.

It was my Dads birthday at the end of September, so one of the cards I’d done just before had an obvious home. We used to own lots of animals and Patagonians were once his favourites.  As for the other card I did in the same weekend, my Macaw picture is yet to find a home.   Both of these were done with my new Sakura Koi watercolour set.

Then I spent the week just gone completing a watercolour painting with the same set.  This was of a yellow Labrador. Of that week I spent about 2 nights with no progress as I was fussing over the new kittens.

Of course I couldn’t end this update without including some sort of picture of the new kittens.  The black and white was called Rainbow when we got her but we’ve since changed that to Rainy, and the tabby is Tigger, she was called Skittles, but as we already have a Skittles that would have been a bit confusing.  She suites the name Tigger anyway as she has about as much energy.

Anyways, that’s enough from me, it’s now back to finishing my Red Tailed Hawk coloured pencil picture, and of course stopping every now and then to happily glance over at the two soundly sleeping kittens on my bed.